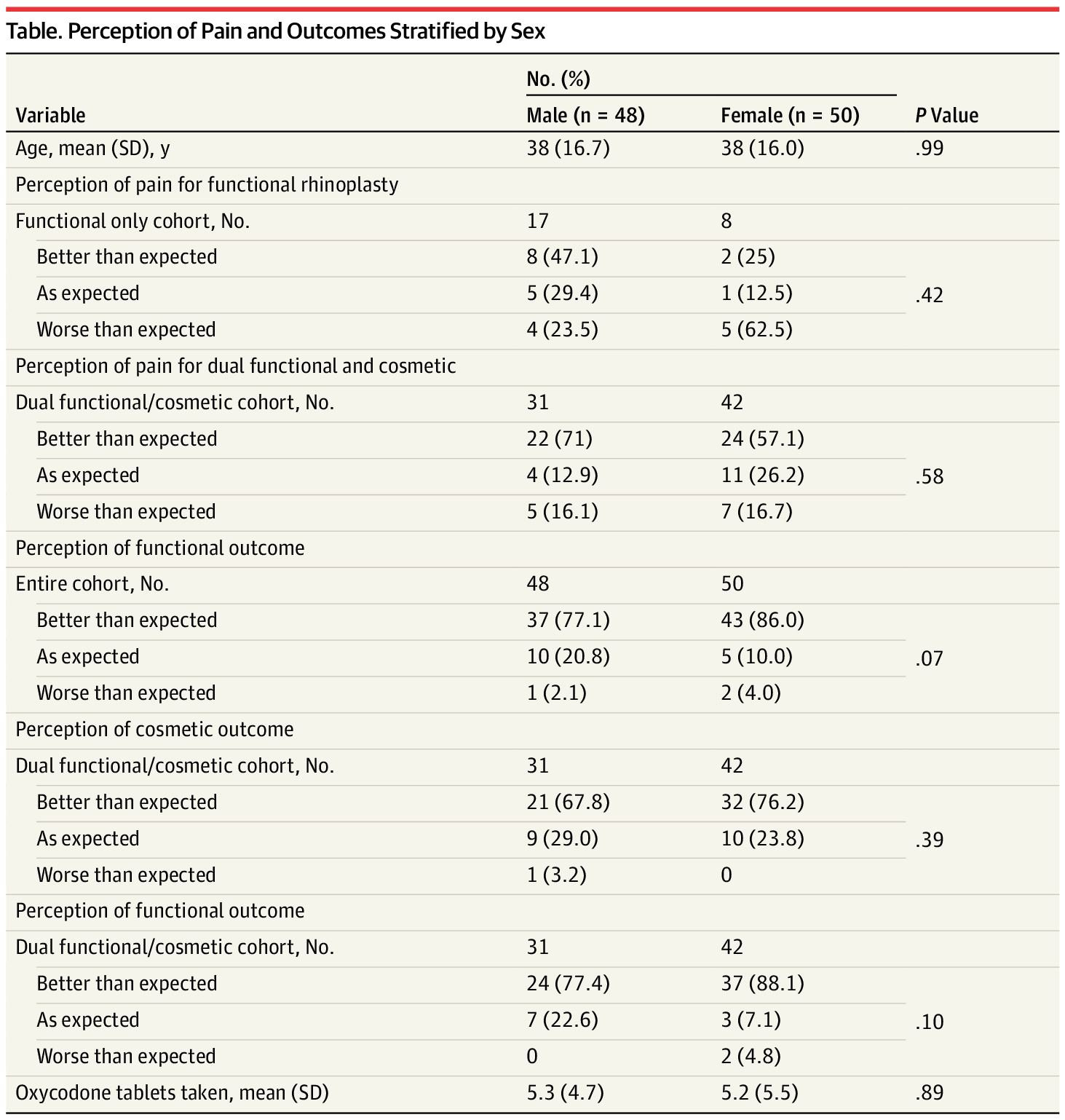 Question  In rhinoplasty surgery is there an association between postoperative pain and perception of surgical success?

Importance  In light of the current opioid crisis, there exists a demonstrated need to balance adequate postrhinoplasty pain control with measured use of narcotics. If pain is inadequately controlled, patients may be unsatisfied with their elective surgical experience.

Objectives  To characterize the association between patient-reported pain outcomes, objective opioid use, and perception of surgical success.

Design, Setting, and Participants  A case series survey study was conducted from July 2018 to January 2019. Consecutive patients who underwent cosmetic and/or functional rhinoplasty by 2 facial plastic surgeons (D.A.S. and L.N.L.) at an academic medical center were surveyed 1 month after surgery.

Results  Overall, 104 patients were surveyed; 6 were lost to follow-up. Of the participants included, 50 were women with a mean (SD) age of 38 (16.0) years and 48 were men with a mean (SD) age of 38 (16.7) years. Although patients were prescribed a range of 10 to 40 tablets of oxycodone, patients took a mean (SD) of 5.2 tablets (range, 0-23). There were no significant sex differences in perception of pain, perception of outcome, or narcotic use. Among patients undergoing purely functional rhinoplasty, a statistically significant negative association between perception of pain and perception of functional outcome (breathing improvement) was evident. Patients who experienced less pain than they expected had a greater perception of functional improvement (rs = −0.62, P = .001). In contrast, among patients who underwent rhinoplasty with cosmetic improvement, no association was found between pain and perception of surgical outcome (rs = 0.05, P = .64).

Conclusions and Relevance  To our knowledge, this is the first study to prospectively evaluate the association between opioid use, patient-reported pain, and perceived surgical success. These data may help guide preoperative counseling because patients who are interested purely in breathing improvement (without cosmetic change) may warrant additional pain-specific counseling to optimize patient satisfaction.

Association Between Pain and Patient Satisfaction After Rhinoplasty